Iris® diaphragm control valves enable the stable and repeatable regulation of media over the entire valve stroke. For gases and aeration air, the Iris® valves are designed so that the quantity to be regulated can be operated within a high control-accuracy range without hysteresis. Its unique design with six centrally opening segments which can be retracted completely into the casing results in an equal-percentage valve characteristic for the Iris® valve. This leads to a virtually linear operating characteristic curve with a large control range, enabling the operation of economical control loops. The differences in the operation of control valves and Iris® diaphragm control valves can be briefly explained using the example of the Upper Blackstone wastewater treatment plant in the Federal State of Massachusetts (USA). 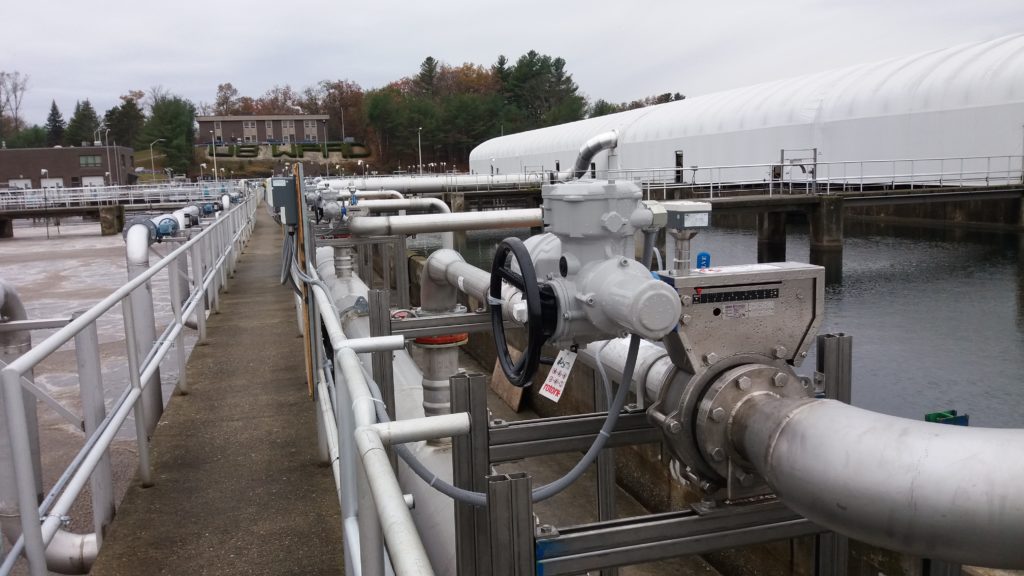 Complete renewal of the wastewater treatment plant’s biology took place in 2018, including replacement of the existing butterfly control valves, blower technology and diaphragm aerators. Besides process optimisation, the objectives of this major conversion project included energy savings when ventilating the aeration basins. With an average throughput of 30 mega gallons/day, hydraulically corresponding to a 670,000 population equivalent, the plant consists of 4 aeration lines with 7 control valves each. During the conversion measures, the manually operated butterfly control valves were replaced with Iris® diaphragm control valves in order to enable precise oxygen input into the basins with the aid of a most open valve strategy and thus reduce energy costs. Upstream of the control valve, each aeration zone was equipped with an ABB Sensyflow type mass flow meter in order to control the Iris® valves using the actual flow volume and operate them in the most open position possible.

Figure 1 shows the process diagram for the aeration basins. Basin zones F and G are each operated with different oxygen set-point values of between 0.5 and 3 mg/l O2; the detailed settings are shown in Fig. 2 DO Set-points.

Striking improvements could be realised after just a few weeks of operation thanks to a most open valve strategy (MOV) with the Iris® valves. The required oxygen contents for the various basin zones were adhered to very precisely without tuning with minimal fluctuations around the O2 setpoint value (see Fig. 3 Results & Achievement). 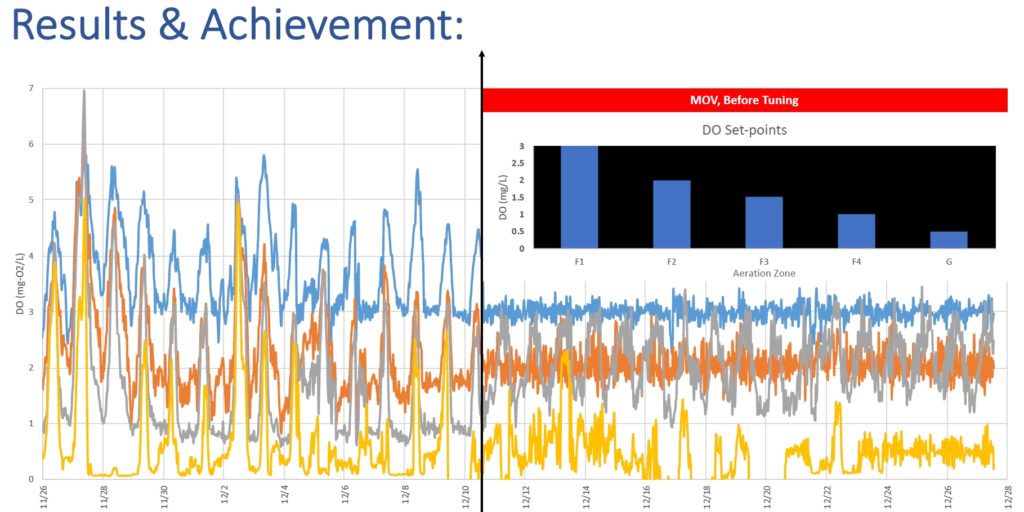 At the beginning of 2019, the – most open valve strategy – was further optimised using Iris® valves; the results are self-explanatory:

Figure 4 clearly shows the high control accuracy of the Iris® diaphragm control valves; the actually achieved O2 values only fluctuate slightly around the set point value with a constantly changing air volume input depending on the current dirt load at the wastewater treatment plant. The air volumes are shown in the lower half of the diagram in ‘standard cubic feet per minute‘ (SCFM).

This highly precise control philosophy and the new machine technology enabled significant amounts of energy to be saved, as a comparison of the plant’s daily energy requirements between 2016, 2017 and 2019 shown in figure 5. The energy consumption could be reduced by 10 % on average, as shown on the red graph from 2019 (operation with Iris® Diaphragm Control Valves). The discharge values were also significantly improved and the use of additional chemicals such as carbon was extensively reduced. 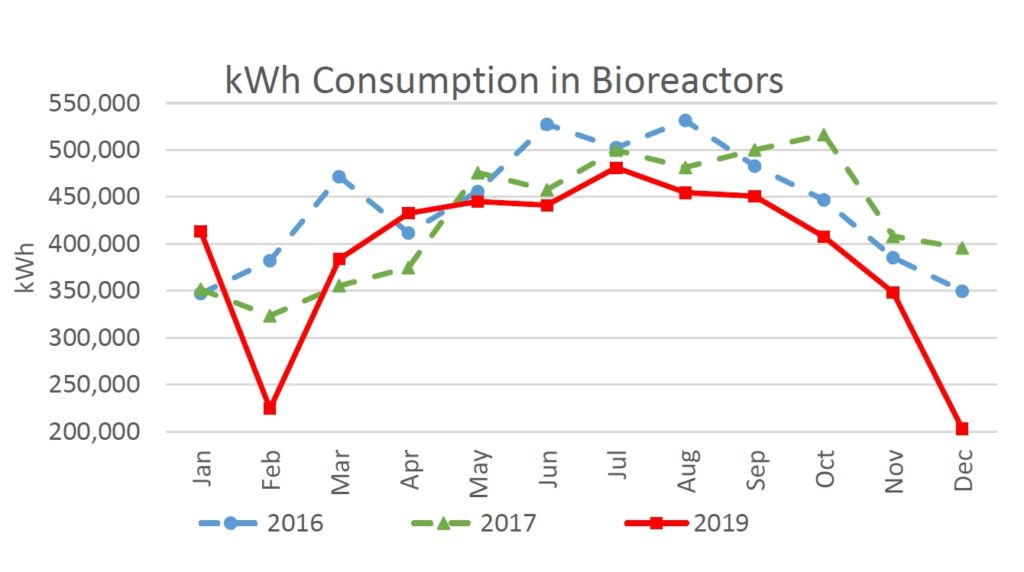 Fig. 5: Energy consumption in bioreactors at the Upper Blackstone wastewater treatment plant before and after optimisation of the biology (Butterfly valves in 2016 & 2017, Iris® Diaphragm Control Valves in 2019)

Link to the complete article appeared in Fluid Handling 4/2020